We pulled into Yerington, Nevada Thursday night and man the wind was really blowing hard! Because it was so late we knew it would be best if we got a hotel for the night as we knew that setting up a tent in the freezing cold howling wind, at Night would have not been the best thing for our marriage. The next morning we met up with Paul Hartnel, who is a Rally Driver from Canada and he comes down to drive for the Dingos. We all ventured over to the race pits (camp grounds)and found Dennis “Crusty” Lange eating breakfast with a Class 9 team. It was cold, cloudy, and we soon learned—wet. Right as we started to set up our tent the Rain, Hail, Sleet and Snow started up, and to top it off our rain fly was in the nose of my Kayak—yea the one sitting at home. Thankfully we had a ground tarp that made a great rain fly.  We waited for more of the team to show up and in meantime Dennis Lange and Romy Fredricks proceeded to work on last minute details to 1107. I took the liberties of setting up our make shift kitchen and it was fairly warm due to the exhaust from the car, plus it added to the flavor of the food. 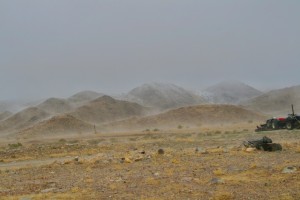 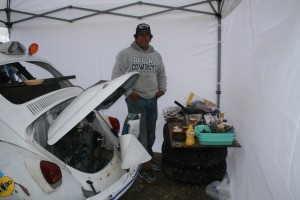 As the day progressed Jim Graham and his wife Roxanne showed up and we erected the ultimate suprime camp kitchen and it’s actually the structure they use in their Rurning Man camps. The wind had no affect on it,,it was solid! Crusty and  Romy took 1107 out for a pre-run and the rest of us just tried to say warm. Roxanne made some fantastic Lasagnue Soup and it simply took all of the chill away,,,man it was good!. Eventually the day came to a close and with a pre-run in the books a couple of the drivers felt pretty confident with the course and we spent the night huddled up to the fire and Ryan Drake and his wife Alicia pulled into camp with their Side-by-Side Sportman class UTV. This was a big weekend for him as this would be his first race! We were having a great time until the rain started to fall—AGAIN! 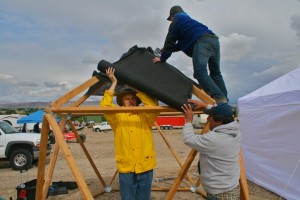 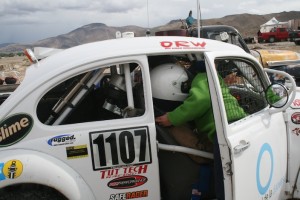 Saturday was a busy day as the work continued on 1107 and it included radio checks, brake adjustments, tuning the carburetor, and organizing the tool station for the pit-stops. It was a good time for me as I got have more hands on and help wrench on the car. Bus Boy Bob Russell and Romy took 1107 out for a pre-run session and they got back just in time to clean up a bit and to head into town for the Tech inspection, Drivers Meeting, and the Parade of Cars. Debbie liked this as Dennis “Crusty” Lange invited her to drive in to town and to sit shot gun during the parade. This was the first time I joined the team for a Driver’s Meeting, so we were more and more really feeling like we were part of the team. 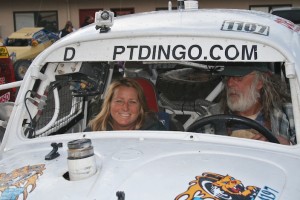 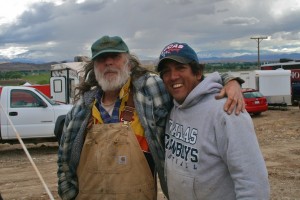 Race Day! We were up early and before you knew it, it was time to get 1107 to the starting line. First off the line was Dennis “Crusty” Lange and Ralley Driver Parl Hartnel sat in as Co-Driver. Jennifer Fredrick’s maned the radio and mile markers were called out by the Co-Driver and everything was rolling good. Next I was to Co-Driver for Bus Boy Bob and it was a bit exciting waiting to suit up, but I had no suit! I was going to us Paul’s suit, so I had to wade around in my Purple Kings Boxers. 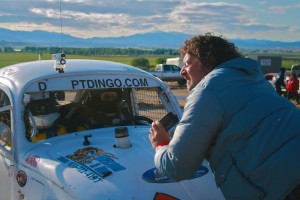 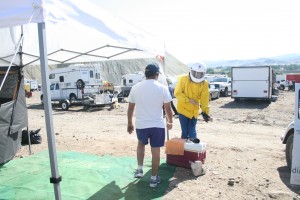 It was time to go and we quickly made the race suit change, but Paul was a bit of surprised as I guess that part was not clearly communicated to over the radio,,,it was kind of a funny moment “What? You want my Race suit?…and my Helmet?!!!” And soon we were all looking at Paul in his boxers. 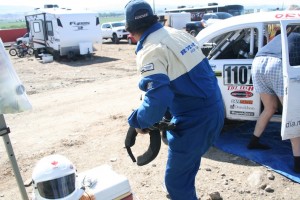 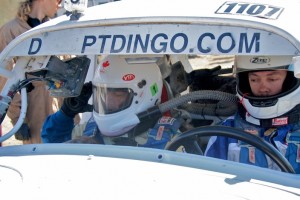 Bob and I took off and the real adventure started. Radio communications were working great and Bob basically commentated his run for me. We passed two other Class 11’s and we were sailing along real good them BAM! We kicked up a big rock that started a very harsh rubbing sound. He pulled over and I went to work to locate the problem. Soon though my helmet fogged up and it was hard to see, I didn’t know how to flip up the race shield, and I more or less felt like a helpless Rookie. Bog was out in second and I got another good lesson. The rock hit the fender and bent it into the tire. We folded it out and that took care of that and with in minutes we were back on the road. Outside of that it seemed to be a flawless ride, but we did have a close call as we hit one of more dangerous sections right as we were being passed by a Class One (much bigger, much faster). They dusted us out and Bob was blind but he maintained his line as best he could and it was an eery feeling as we felt the car moving out from under us. We got back and delivered the car to Romy and his wife Jen who would Co-drive. 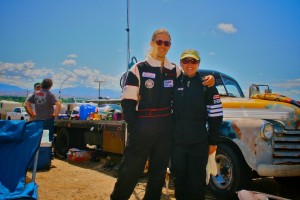 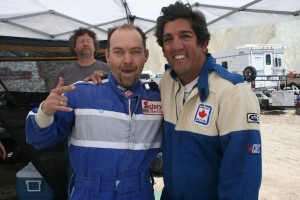 Romy and Jen were off and running and 1107 seemed to have everything going good, then the radio call. “We are broke down at Mile Marker 36, the trailing arm pin has feel out!” Disaster struck and this was no easy fix, and to top it off much of the communication filled with static. All we could do is wait to see what was going to need to be done to fix the problem. Due to the trailing arm sagging I guess it did some damage to the rear axle, bad enough that it needed to be replaced. Parts can usually only be transported out to the team via another driver, and most of the cars were now going to be driving a new shorter route, so it was not looking good. We eventually had the thought of looking at the map to see where they might be and we figured they were maybe at the most a 1/2 mile from the main access road. Romy requested the new part (that we borrowed from another team) and Crusty the crew chef to come out. So we loaded up in out Pathfinder and head out. We found a dirt road that we though was going to lead us to them,,but wrong road. We traveled down another and soon we could see dust from other cars, then there she was 1107! A little dot in the dust. We parked the car and ran the new axle out to them. Romy did a great job exchanging out the Axle and Crusty worked on securing the swing arm plate. Jen as always had her cheerful smile all the way through and Debbie had some cold drinks and energy bars for Romy. Before you knew it they were back on the road. 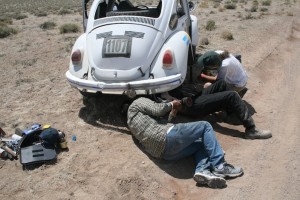 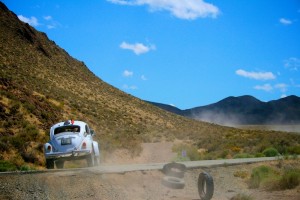 It was time for some fast Pit service and we had to get our last two short runs in. Paul Hartnel and Bus Boy Bob would do the first short run and Paul was driving and Bob would Co-Drive.  Their run went off without a hitch and we were still in the race, but so were the other 11’s. Actually, they were both in front of us. A beautiful thing to witness is how the Dingos provided support for other teams, and even to the point of helping other teams that they would eventually be battling it out with. But the Dingos race with Class,,,that’s what I’ve learned, that what I’ve seen. Ryan Drake was having electrical problems and I was back in the Pathfinder again as I shuttled Alicia out to the Pro-Bits with a new part, but to no avail, he never got his rig running. However, I was amazed at his positive attitude the whole way through. 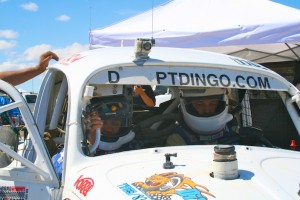 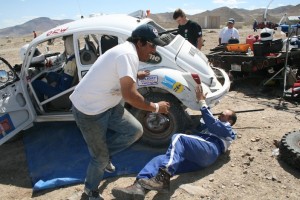 Mile markers were being called out and then we heard them say “We see ll42, and we are on them!” So the order went 1156, 1142, then us, 1107. Bob was doing all he could to catch and pass, but the dust would blind him out and there were not many good places to pass. We could here the other radio transmissions and it sounded like 1156 was having problems, but they eventually decided to take the chance and press on. For 40 miles these three battled it out! Deb and I went to watch them drop down into the pit area and it was to say the least exciting. We saw the dust up on the hill and first to drop down was 1156, and as soon as he passed we saw the dust from 1142 and,,,,1107! Their motors were pinned and they were going for it. At the finish only 90 seconds separated the 1st place car from the 3rd place car—un heard of in Off Road Racing. 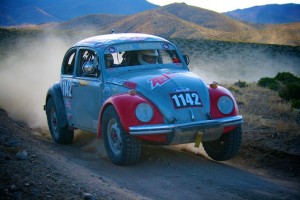 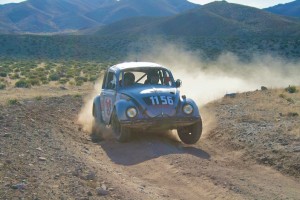 It was a great finish and 1107 grabbed second place! Much was learned during this race and for me was that it’s never over until it’s over. You never give up! Everyone place a vital role, no job is more important than the other. We stood around, took some pictures and then headed back to camp, but,,,,the Dingos let me drive 1107 back to to the pits! A fun moment and gaining some trust has meant a lot and we hope to continue to be a part of this fantastic team for as long as possible. We have come upon a bunch of wonderful people and have express much friendship, and not just to us, but to all the teams they come in contact with,,,even those they compete against. 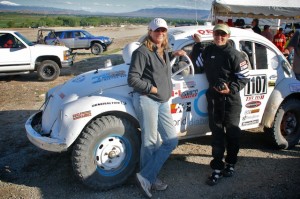 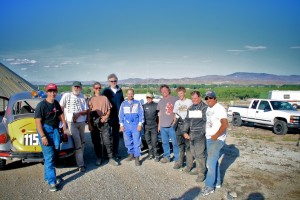