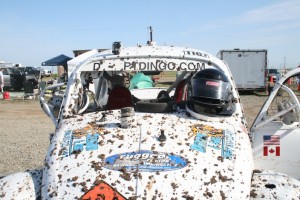 We took off  from Lake Forest, CA loaded down with our display board, camping gear and kayaks on a cloudy windy day and soon the clouds opened up and let the rain fall down. All the way to Galt, CA! Rain, rain, rain. No worries we have a great week planed and a week from today we’ll be in Prairie City hanging out with Desert Dingo and our first taste of Class 11 Racing!!! Wrong,,,I goofed up on the dates and ended up with one weekend pack with visiting Horizon Community church, lunch dates, a BBQ, visiting friends in Galt,,,and now a race, not just a race, but my first race actually sitting in the car!! But here is where a man knows he is blessed with good friends, and being in the company of not only a Race Team, but a Race Family. We put on our tap shoes and everyone could clearly see that I screwed up big time, and even Jim Graham with the Desert Dingos put out a call for us on Friday night to see if we were OK, and going to be coming. I was not off to a good start in my first meeting with the Dingos.

On a cold wet Saturday with our rudders tucked between out legs we slowly rolled into a very quiet Pit/Camp area at 6:30 am and there it was, the Dingos 1107 Class 11 race car. I’ve seen tons of pictures of it, seen videos of it, but now it sat there silent and covered with water drops left from the vacating storm. As we got out of the car a nice gentleman had just climbed out of this tent and with a cap on his bed-hair and a big smile he made his way over to us, yes, it was Jim Graham. No–“What happened?” “How could you?” No frowns,,,nothing just a nice welcome smile and a big hug. You see we’ve chatted on-line, talked a bit on the phone, but never actually met in person, and it was great to finally meet up with Mr. Dingo himself.

Slowly they all made there way out, and slowly got into preparing for a day of practice and heats. Jim showed us around, took us over to the track and really made us feel right at home. Next was the Coffee and this is when we got to meet Roxanne, Jim’s wife. I had to really appreciate the fact that she had no problems hiding the fact that she spent all day Friday in the Rain, a long night sleeping on the hard ground, and all she wanted was some Coffee–she is a trooper. We fumbled around, got this and that and soon the beautiful Hot Black Coffee was in our cups making our hands toasty and our minds functioning. Jim and Roxanne, two very fine people and it was a pleasure to be in their company.

1107 was soon warming up and rumbling away and team members Bob, Romy, and Crusty were making their way around making sure everything was set and ready. Minor adjustments had to be made and as they went about their work we slowly got to get to know them. Being the new guy I quite did not know what to do and I finally realized that I needed shots of 1107 and so I started to take pictures and started asking questions. We eventually felt like the little brother trying to hang on to the coat tails of our big brother and wondering if they were going to say “Alright already,,enough of the questions!”, but no, not these guys. We could see that besides being a Race team, they were more like a Race Family, and not just to themselves, but all of those around them and the other teams as well.

The rain was a bit much on Friday, and the heats for the day were canceled, but possible practices would maybe take place in the afternoon. We took this opportunity to head back to Galt and mend up some of our,,,,uhhhh,, my goof ups with the calendar. By the time we got back and settled down at camp everyone was sitting around the campfire chit chatting and it was nice to have them include us in and give us some time to share more of who we were and what we do. It was fun hearing “Oh yea, you the people from Mexico!” We’ll have the pleasure of hosting the Dingos in November for the Baja 1000.

It was Sunday morning and things were really moving. Heats and Moto’s needed to all happen in one day. The track was still muddy, and they had to reduce the size of it. I had just started to think about breakfast when Jim approached me with the words I was waiting to hear “Go ahead and suit up, you’ll be first out with Crusty”. The red suit came on then eventually the call for the first heat, that’s when Crusty said “that’s us, let’s go”. It was in the seat, on with the Helmet and Jim showed Deb how I get strapped in. We make out way to the start line and being it was the first event VORRA (Valley Off Road Racing Association) had an opening ceremony and Lynda MacNeil of the Dingos sang our National Anthem!

It was time, I was entering a world that I never really thought we’d get in to, but here I was at the start line, helmet on, strapped in and absolutely no real idea of what to do as a co-driver on a short course track. We shook hands, waited for the green flag and we were off. It did not take long until we found our selves,,, fighting the car as the mud was every where causing the car to go just about every where except where you want it to go. Of course I was more along for the ride, Crusty was the one with the real battle on his hands. We made 3-4 laps and a Sportsman buggie came up on the left to us and Crusty made him fight for the line, and then, BAM we hit, but nothing big as we both kept doing. As they pasted us the mud started to splatter us and it was neat sensation as it hit you, your face, and all over car but Crusty kept the hammer down and tried to keep up. As we came around on the next lap the Black Flag was flying but Crusty did not see it—OK,,radio’s not working, how do I tell Crusty we got Black Flagged,,,uhhh I dunno. Next lap the flag man was giving us the “Smoking” sign along with the black flag and that caught his attention and in we went.  So my first time out was cut short and the team pulled us in as things just did not sound right, and 1107 just seemed a bit short on Horse Power. They soon found a loose header pipe at the exhaust manifold, and they re-adjusted the valves.

Race after race there seemed to be a small thing that was causing big problems, well that is except for the busted rear axle that left their rear left wheel sitting in the mud. At no time did they give up, and everyone did what they could to keep 1107 in the race, and that’s what impressed me more than anything. All in all it was a great day, a great weekend, and we met some great people. Next,,,,we’ll be traveling to Yerington, NV and we’ll be there for the Yerington 300 desert race. Not my first Desert Race, not my first time with the Dingos, but it will be my first time as a Co-Driver in a desert race.