A Day with Bill

A Day with Bill 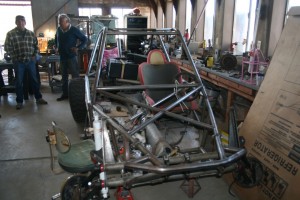 I had received  lead from a friend and he told me of a guy by the name of Bill Lawrence that is the Director and founder of an orpanage that sits about an hour south of Ensenada, it called Rancho Santa Marta. I sent out a contact form to see if I could get a hold of Bill as I had met Bill many years ago, you see Bill has been involved in the off-road racing scene for many years. So a couple days past and the phone rang and it was Bill! We picked a day to hook up and he wanted to show me around, and I was very excited to hear of his adventures in the Off-Road racing world. We had a nice drive out there and when we got there we walked in on Bill as he was neck deep in paper work preparing for Taxes. We had a few moments of reconnecting and as Bill always Best Puts it “Well,,,about this Racing Stuff!” And we were Off… Bill is rich in history and he had many informative stories to tell us. Bill started out in the 70’s with a Class 5/16 (Baja Bug Style) and worked his way up in a couple other classes. Before we knew it he was shooting off names of famous racers, retired racers, good Ol’ Boy racers, and those that will be able to help us out. At one time Bill even said “I don’t mean to sound Prideful, it’s just that the Lord has Really Blessed me with this”. 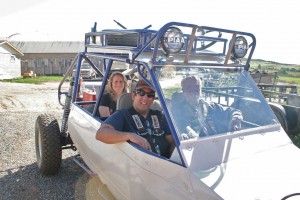 In many ways it was like watching a History book unfold in front of you and Bill constantly refereed to how he has been able to talk about his faith in Christ and at times he was able to call out others or how other Christians seemed to be able to share of their faith knowing they had a fellow believer in the Race. Bill did more than just race a car, he spent countless hours as a teacher at the school teaching welding, and now one of his young students has grown up and is now teaching the Welding Class. They might not be involved in the Score circuit  or even the local events too much any more but they still continue to work on Cars and trucks and at times the students of the class participate in building the Race Car. 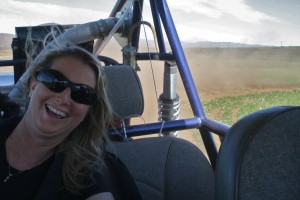 So after some good talks in the Shop Bill walked us around the Campus and showed us where the 30-40 children live, the school grounds where some 150 children attend, and all that it takes to keep their operation moving. It was very impressive to say the least. The Orpahage and School both sit on 450 acres of land and some of that is also used for Farming as they have Pigs, chickens, Horses, and even Cows that benefit from the crops they harvest.

Then we were totally caught off guard as he took us back up to his shop and asked if we’d like a ride in the New 4 Seater Open Wheel buggy! A beautiful car with a VW 2100cc power plant. We all got bucked in and off we went. Bill has his own little off-road track marked out and I guess it’s easy to do when you have 450 Acres of land. It was a Thrill, and Debbie absolutely loved it. Debbie is thinking about the whole Co-Driver thing and at first she was leaning more toward NO,,,but now it’s more towards YES!!,,,maybe. We then slowed things way down and Bill invited us in for a delicious lunch, and of course we talked about Cars, Racing, and shared our experiences, and ups and downs about living as Missionaries in Mexico,,,there were way more UPs that Downs. We are looking forward to more visits with Bill Lawrence, he’s a great guy.