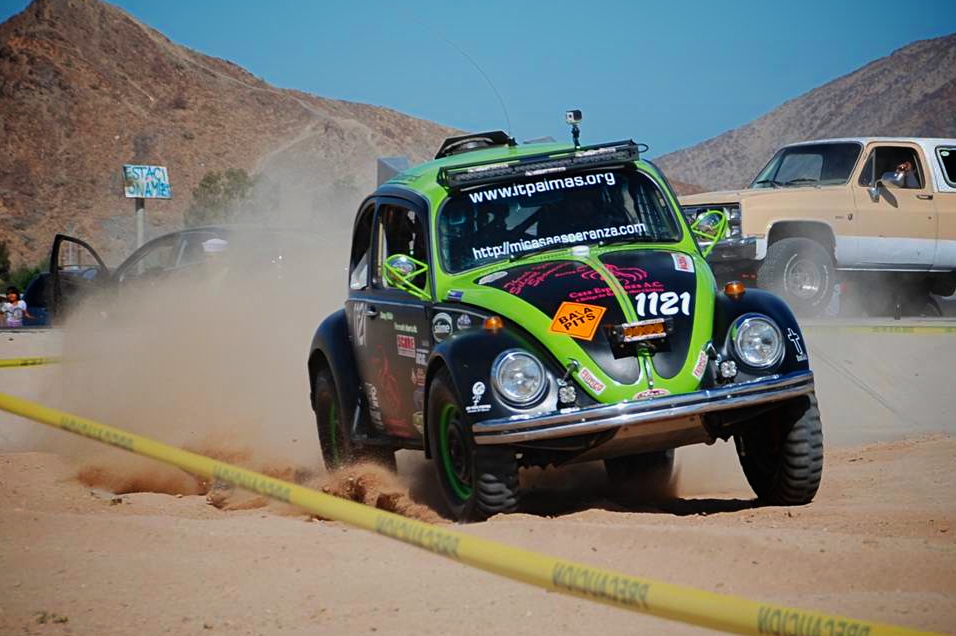 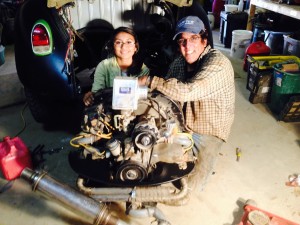 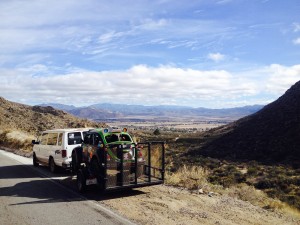 We have been home for a week now and still cleaning up from the San Felipe 250 and we’re almost there. Amazing the number of things that need to be done before and after the race. This was a race we almost did not make. We scheduled some pre-run time to take place the weekend before and this would be a great opportunity to get Dave Forrest and Nick Sandez in the car, plus break in the new Transmission, thanks to Federico Montes at Montes Motors and Transmissions. This new transmission had the new “Super Differential”. The day started off great with breakfast in Valley de Trinidad and after some great Machaca we were off to start the pre-running. Car ran great! We decided that it would be good to have me do a small, but difficult part of the course, and it started out on “The Coat Trail”. As we made out way up the trail we went over an old cattle guard which was more like a hunk of concrete to punch over. Well we did and the tranny let go,,,all I could do is yell out,  “Are you Kidding me!?!?!”
Amazing thing is, Federico Montes had the transmission apart on Monday and diagnosed a faulty “Super Differential”! By Tuesday afternoon the transmission was fixed and back in out shop. Gabby and I started the process of re-installing the transmission and motor. On Wednesday night we fired up 1121 and took her for a ride. Thursday she’s up on the trailer and ready for the long drive to San Felipe!!! 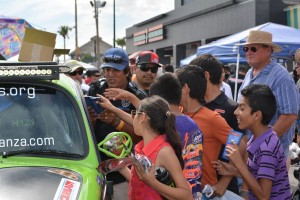 was contingency,,,moved slow and seemed to just eat up the day. We did have a good time and it’s always fun to talk to people about the Bug. We let kids sit in the seat, press the horn button, and we h 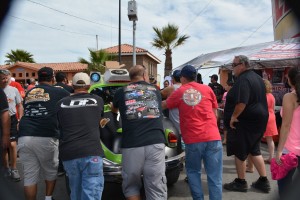 handed out plenty of Gospel of John booklets. Inspection went smooth and no problems. We finished up the day by just checking things over and adjusted the brakes. It was very nice to simply,,,relax.

Race day, 1121 is ready and off to staging, then we hear some chatter over the radio about check points being moved,,,what?? We zeroed in, halted chase team movements to mile markers and found out that a large section of the course had to be eliminated due to weather related problems. Come to find out, a section of the course was under water and the bulldozer that was going to doze up an alternate route was sitting on a truck—-stuck in the mud. I gotta give Score credit for marking an alternate route with very short notice and they marked it very well.

1121 started the race with it’s 2 hour delay (as did all the racers) and it was at about 1:30 pm when we got racing. Dave Forrest and Nick Sandez were first in the saddles with Dave driving. This was also his first time actually getting some Zoom zoom time. All was going well until they started to hit the silt beds. Driving through silt is like driving through baby powder, and this stuff can be waste high. They stuck to it, pushed, pulled, shoveled, and used our Smitty Ramps to keep 1121 going. The other Class 11 team was having problems in the silt as well, but for this being our first time racing through silt I think we did very good. 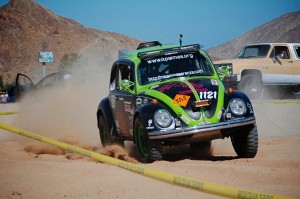 Dave and Nick made there way to mile marker 80 and we were all very relived and excited to see 1121 racing along. The weather was now going to show it’s ugly head and the rain started to fall. By the time Dave got 1121 to 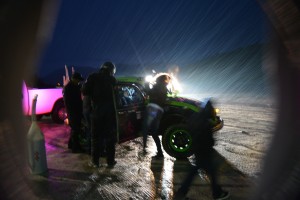 mile marker 85 the rain was just coming down and no let up in sight,,,and it was getting dark. We also discovered that the wipers were not working, and the front Baja Designs’s driving light were out as well. We still had the 10” LED Amber light bar, and the 30” LED Light bar up top. We had applied two coats of RainX on the windshield and decided not to kick it out.

I (Dennis) would now take over and Danny Waite would be my Co-Driver. We had to drive a small section of highway to get you our off-road section, and it has come to be known as “Mike’s Loop”. The rain was coming down hard and the driving on the road was like driving on “slime”. Up hill climbs went slow, but the tachometer was revving, and the wheels were spinning. The RainX did great until the rain stopped, then the water was sticking to the windshield with—-mud! The switch backs were no fun as I really could not see much of anything except for the blackness on the un-guarded drop off’s—-one wrong move,,,long way down. Danny Waite was on his game helping see the course, and needless to say when we got down off the mountain it was 3rd gear and we drove 1121 as fast as we could through the mud and water puddles. According to Debbie’s notes I think we even gained a little time on Rivas Racing.

Do to the course cha 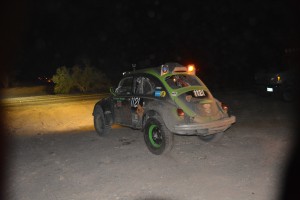 nges we’d now have to drive a long stretch of highway that would take us to Kilometer marker 179, the famous Borrego crossing. My first time 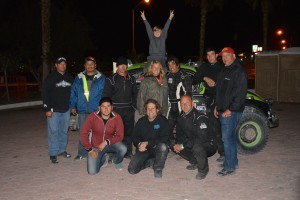 navigating whoops and again Danny was on his game and helped me find my rhythm. We played cat and mouse with a Class 19 for a while, but then came up on a Class 10 broken down on the course,,,hummmm. We proceeded to make our way around him but kind of got stuck our selves and stalled the motor. I knew we were running tight on time and the last thing I wanted to do was to get out and get her un-stuck, so we started up 1121 and punched it and,,,,we were rolling!

Our next pit stop would take us to Check Point 3 and it was nice to see it still open for business! Our pit went smooth and clean and we had to change out one very bent up wheel. Now Nick Sandez would take over with his CoDriver Fernando Huerta and this would be both of their first times driving a Class 11 in a race and taking 1121 to the finish line.

It was a nervous wait! Being the Driver on Record I was going to have to drive 1121 over the finish line, so I was waiting track side about 1/4 mile from the finish line. CoDriver Fernando Huerta says that Nick did an outstanding job in picking the right lines and punching it when needed. So all Driver/Co-Drivers did their jobs in delivering the car in great shape to the next team. 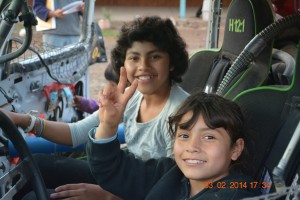 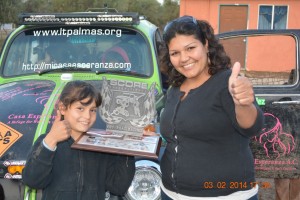 nd  it was great driving her up onto the platform for all to see. In all of our races we will carry close to us the hearts of those at Mi Casa de Esperanza. The children there have adopted 1121 as their own and we will do out best to always run hard and run far for them. So for the Mother’s, Children, and staff of the Casa, we give this Victory to you.