I remember sitting in the grand stands of the Speedway with my Dad and how I wished I could some how get on that track and race. Then one day I stood in a dry river bed and watch a Class 9 buggy go by during my first visit to watch the Baja 500. Again I could only think of how cool it would be to race in such a spectacular event. It has taken a long time for all of it to come around but it looks as if I’ll be participating in not only a race, but The Race,,,The Baja 1000! We were very sad to hear that the Desert Dingos were not going to make it down and it looked as if again I’d simply be watching  the race go by. Jim Graham of the Desert Dingos made a call and broke the ice and finally made my way to meet a Baja Race legend, Eric Solorzano. 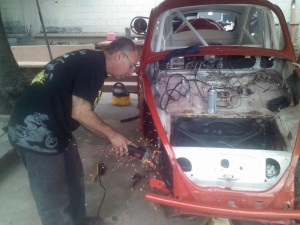 Eric is a Class 11 veteran class 11 score champion, a 10 time score international points champion, a 9 time baja 1000 champion, a 1 time baja 2000 champion, he has approx 50 score class 11 wins, he  was in the off road documentary film “Dust to glory”, he has his degree in business, and he raced motocross for 18 yrs, then moved to Class 11 off road in 1989. We are talking history here! The red car we will be racing with has won more Baja Races than any other car and in any other class, and it is destine to eventually end up in the Off-Road hall of fame. Meeting Eric for the first time really brought him down to earth, a genuine nice guy that is there to help out any one that needs it. So one would expect with a resume  like his to meet a guy that has no time for you, but not Eric, and he’s the one leading the charge and the first one under the car.

I have found my way to Tijuana where 1100 is kept and it’s simply kept under a large canopy and that’s where the work takes place. For Eric winning the Baja 1000 starts now! It starts with each bolt that is used and every part the bolt secures. The race coming up will be a peninsula run, meaning we’ll be racing the Baja Peninsula which will start in Ensenada and end at La Paz. We will have a 40-42 hour time limit to finish the race and that means two full nights of racing! Yes, there are multiple Drivers and Co-Drivers (I’ll be Co-Driving), and we’ll be racing at 5-6 hour intervals. As Eric explained all of this he said in his quiet calm voice “It’s ok, you’ll see,,,,you’ll see why we do this,,,(then he chuckles) and eventually you will be sick of it, you’ll simply just want out of the car, but you’ll see why we keep on doing it”

So Follow along, this will be an adventure unlike any other.