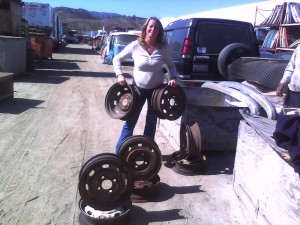 This last week Deb and I knocked out about 4 birds with one stone, sadly the San Felipe 250 was not one of them, but still,,,we had a great time. We drove the Plymouth up to have some work done on her, we attended the Temecula Rod Run, spoke at our home church and went to Interstate VW Wreaking Yard. Part shopping for the Bug was a high priority and I found this cool Wreaking Yard in Lake Elsinore via “The Samba.com”. We headed over there on Thursday morning and a big thank you to Paul and Teresa Milano who let us barrow their suburban as the Plymouth was receiving a new Holley carburetor and intake manifold,,,well,,,not that I’d be putting old crusty parts in the Plymouth. This was an exciting place, even if you don’t have a bug! It was much bigger than I thought it was going to be and there was stuff piled everywhere.

Not only did we see tons of bug stuff, but there was also a small collection of some rare beauty’s, just sad to see them rusting away. Being a “Mopar” guy we were also excited to see a Dodge Dart with in the collection, and I saw some stuff I’d never even seen before. An Oldsmobile Ninety Eight? Saw some old Ford Falcon cars, station wagons, and some Falcon Ranchero Pick ups. Simply amazing.

We did have some success and the guys at Interstate VW took good care of us. They fished out a German Front Beam that was in good condition, and we also picked out 8 15″ wheels, and they gave us and additional wheel just in case one of the eight is bad. So it was a great day at Interstate VW and we plan on going back to see what else we can grab, maybe even another beam. Due to the fact that we had the Plymouth the parts are being well cared for in Lake Elsinore and they’ll soon be here getting cleaned up and re-fabricated for Racing!