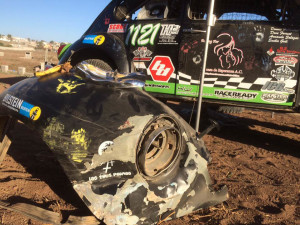 The Score International Rosarito Desert Challenge. A small 32 mile loop that would have us go two laps, and 2 heats, one on Friday and one on Saturday. What could go wrong? I mean come on Score,,,we run races that are 400 miles, 500 miles, 800 miles,,,1275 miles,,,mehhh 32 miles,,,that’s it? What could go wrong? Well, maybe that was our first mistake, thinking that with only 32 miles not much could got wrong. We came into this race in not a real good position in the points, but there was a small opportunity to gain a little ground on our Class 11 brothers Noe Guiteriz and Rene Rodriguez, and yes, Art Penner who would not be racing. 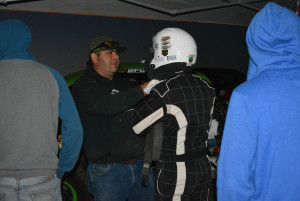 With only completing 75miles in the Baja 500 much of the car was still in decent shape and
the motor was running great and did not require too much work. We decided to run with our back up transmission, and it held up OK, but now there is a problem with reverse. But all in all, the car was ready to go,,,come on, it’s only a total of 4 32 mile loops!! What could go wrong!Our team was small, and even though we had some pit help, there were
basically 5 of us in total vs. the sometimes 15-20 we have during the bigger races. But, with no 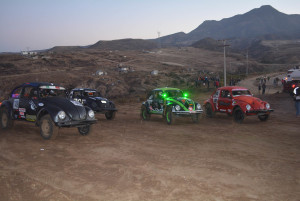 plans to use our pits we figured we were in good shape. Emilio Goñi would be taking his first leap into 1121 as a co-driver and he was a bit nervous, but who wouldn’t be! I think for me the worst part was having to wake up at 3:30 am to be at the track on time for our 5:45 staging time—-ugggg. And being who I am I had to make sure I did not have any coffee as I did not want things to get messy while out there on the course. 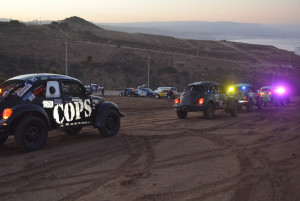 Bochito was ready, all looked good, and hey, it was only two 32 mile laps that we had to do. Be done by 9:00—what could go wrong. We were starting out 1st off the line and it was a beautiful morning, not a cloud in the sky, just the bright sun that would soon be blazing in your eyes! The Green Flags went up and we were off. We were followed by Noe Guiteriz
(1st over all), then 1149, a team out of TJ, Rene Rodriguez (currently 2nd overall), and then a 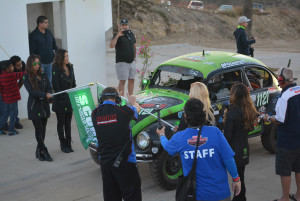 team I’d never seen, 1109—-but mehhh they were last off the line. 1121 felt great off the line and as we made our way up the gradual hill Emilio slowly settled in and for the both of us the adrenaline slowly wore off and we seemed to fall into a good pace. We were not beating up the car, and picking good lines. The uphill silt climbs were not even close to being a problem for us as the Federico Montes Power Plant was spot on. It was a twisty course and the
down hills were pretty steep. We agreed that we would not race the down hills.
Before Check One we were both surprised how many broken down and stuck vehicles we had already passed, which did help us drive a bit more cautious as we did not want to join that club.

(thank you #feelbaja for the use of this video)
The BIG hill climb. Came in a bit too hot and we skipped over the hard pan and fell right into the soft silt and lost all of our momentum. Eric Solorzano was there to help us out and he got us backed up and set for a run straight up the hill. By this time there were 2 other cars learning the same lesson, and all us were scrambling looking for the best approach. 1149 made it up first, then Noe in 1103, and our second attempt was a failure as well. I headed up my original line, but this time we took it slower, held to the left side, then put the hammer down. What a difference, we went right up with no problems. Big Hill Climb Done! Just one more time! We were on the chase now sitting 3rd, and the course was very dusty in some areas and just hard to see your way, and with all the twisting and turning it could be real easy to get off on the wrong track.  We came into the pit area with a good had of steam and we zoomed by thinking we’d come out still in third, but somewhere along the line we passed 1149 and we actually in 2nd, but by RM5, at the base of the silt hill was Noe in 1103 with a down transmission. Then the radio chatter set us straight,,”1121Race,,,1st place, 1121 first place”. So,,up goes the adrenaline as you know you are going to be hunted. We did not know Noe was out, and I thought he’d be knocking on my door. We came up on left hand turn and we almost missed it and turned at the last minute, but we were HOT and 1121 slid right over and we got a nice Kiss for the big pole of the gate, thus creating some nasty tire rub. Emilio called it too “Dennis, watch it,,,careful,,,we’re going to BAM!” We pulled over to pull out the bumper and fender, and I did not realize I was cutting up my hands in the process,,,the dripping blood was the indicator, but with adrenaline spiking I just got back in the car and took off (after bucking up). 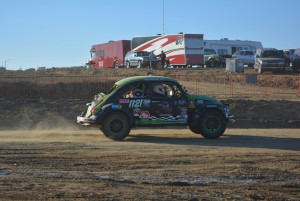 That hit seemed to shake me up a bit and I just could not keep clean lines, and to top it off,,,1149 passed us again. No sign of Noe. My second episode almost landed us on it’s side when we had just came down off a very, very steep hill and I clipped a rock that launched us up,,,and almost over. We’re all good, keep moving.  Just passed check 1 we came up on this gully that had a few cars stuck and it looked like a pretty nasty place to get stuck. You feel bad for the others when they get stuck, but you count your blessing and continue on. Never, Ever, wish a bad race on your competitor. You never want to be that guy.  Back to the big hill climb, but this time we knew what speed to hit it at, and what line to take and man, right up we went. We knew the roughest stuff would now be behind us and we just needed to finish. But, that kind of put us to sleep, and along came the Red Demon car with Mauro Diaz Jr., 1109 and man, these guys were fast! So we’re up on the ridge and now we’re trying to catch’m. We were on their tail and all I could see was an amber and blue light and I stuck to it! Mauro came up on 1149 and as they moved over we stuck close and followed right behind and 1149 had the dust of two, we had the dust of one. Even that was just too much and eventually 1109 pulled away. We were not giving up and I was driving little Bochito as fast as I could. 1109 is still in striking distance and we made this sharp left hand turn and, and, and, just RPM’s, no power. We pulled it over and it seemed as if the Clutch had froze up on us. Everything was jammed up! Well,,,after starting at one end and working my way forward we discovered that a fender bolt was jamming the clutch peddle. After I got it out, everything was fine,,,but the race was over. I felt bad seeing 2nd place slip away from us, and not getting Emilio to the finish line.

(thank you Jorge Rivera for the use of this video)

Day TWO!! Man, what a day!! Race jitters gone, over cast (no sun in the eyes), I had some coffee, visited the little boys room (outhouse) and I was feeling good! Armando and I would drive together for the first time and I felt as if we have the right combos to get it done. We would start 2nd to last this time around as 1109, the Red Demon Fast Class 11 was in back of us.
We watched everyone off the line and we were eager to get going, and little did we know that Dana Brown had Jimmy, the camera man from CBS Sports follow us to gather hopeful footage for the Documentary Dust 2 Glory II !!. The flags went up and we were off. Lines went smooth, Armando kept me going and we had a good rhythm and pace. Didn’t hit the gate, scrambled up the silt hills,,,dang, we were moving good. Did not clip the rock, but wait,,,humm Accelerator cable is not responding normal, it’s sticky. Mile marker 7, it’s like the car has a mind of it’s own, I let up and it would keep going. We rolled into check point 1 at about 2000 rpm at idle, but I decided to keep going—-big mistake. We rolled into race mile 9 and there he is, 1109 and,,, a Class 5,,,all coming at me like a tornado. Best put the hammer down and get moving. Now,,,remember I told you about that section were we saw a few cars parked (stuck, buried)? We came in pretty hot, I let my foot up, but the accelerator was not sticking,,,it was stuck!! I was trying to hook it and pull it back, I got two other cars behind me,,,I hit that ridge with very little time to adjust position and we came down just far enough 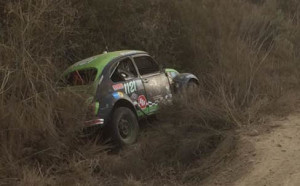 to the left to slide right into the jaws of the BAJA. Thank you Jesus that this was a gully filled with brush and not rocks. We made one charge out and that was it, game over, adios, and now,,,just the sounds of Air Blowers and cooling fans,,,click click click,,,shut it all down.  It’s frustrating to know you had a car that could have easily finished this race, and one has to answer for it and learn from the mistakes of Race preparations. So in light, the race was over before it even started. A little rusty Bolt, worth—-nothing. I first suspected the worse thing, a froze pressure 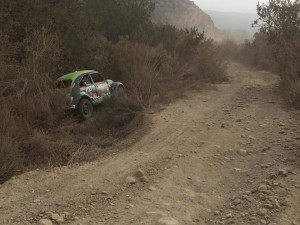 plate. How in the world can you fix that. Then to find out that it was an easy fix. What a shame. But,,,how many times do we do that in life it self. We think we have these huge problems, and they are so big, we can’t even begin to fix them. We might poke about at it, leave it alone,,,but it can also be something very simple, easy. And sometimes it’s because we simply failed to prepare, clean up,,,we sometimes look at life and think,,,”This is easy,,What can go wrong?”
For our sponsors,,,Thank you for your support, you help, advice, and believing in our team.
PCI Race Radios, Baja Designs, Bilstein shocks, KW Machine Works, Muck Daddy, Raceready Products, Kartek Off Road, and Pierside parts. Thank you Roger Norman and Score International for the hard work that goes into planning such and event. Dana Brown, what can we say…Your crew has treated us like gold from day one, we appreciate your kindness. Mario Sandez with GLS Spray/ H12:One cofounder, sponsor—Thank you for supporting us. Dave Forrest with RPM Electric, fellow driver, my voice of reason, we missed you and with you were here, and thank you for your support.
Race Report for the Score International Rosarito Desert Challenge—-over and out! 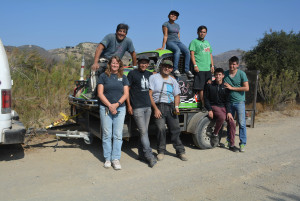